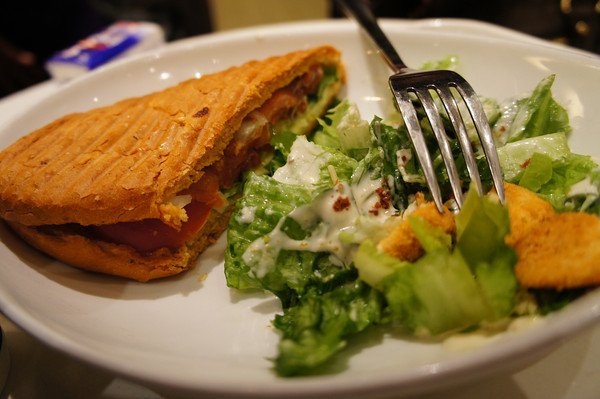 One of the hardest things to find in Hong Kong is a spot to sit down and relax. On average, I think the number of steps I take in Hong Kong versus Vancouver is probably a 10:1 ratio. That’s how much people rely on walking in Hong Kong. Another thing that I wasn’t very used to was the fact that there are restaurants everywhere! There’s literally one at every corner. Hence, there’s a lot of choices. As a foreigner, I was a little overwhelmed at how much competitions these people have and yet they remain in business.

I didn’t know this until I wrote this post, but Oliver’s Sandwiches has been established since I was born (now you can try guessing my age). Originally a snack bar, but has now evolved into a franchises in both Hong  Kong and the Philippines. Like many restaurants in the malls of Hong Kong, there aren’t much food courts or a central location just for food. They are spread out on multiple floors and multiple corners. And usually it’s an open area instead of a closed area. They would have something like fences surrounding the area, but nothing like walls or windows. I’m not sure if I like the idea of eating beside walking traffic.

The meal comes with a ceasar salad, half a panini, and a soup. All for $68HKD, which is approximately $9CAD. It’s not exactly the cheapest meal you would find in Hong Kong but fair prices in shopping malls. The salad had plenty of dressing, and it tasted no different than the ceasar I would have here in Vancouver. The panini, I’m trying to think what was in it, I believe it was a smoked salmon one. The panini was soft and crispy, I was pretty surprised that even western food in Hong Kong had such high standards.

Overall, the experience was quite interesting. Your food is brought up to your table after you have ordered it up front. It feels like a food court, but not really because you get luxury of waiting for your food brought to you (without paying the tips). The place was packed at 4-5PM in the afternoon when we arrived. I have a feeling that people in Hong Kong do like western food because there’s a place to sit comfortably and chit chat. And just slow down and sip on a cup of tea or coffee or whatever the variety may be. At least for me, I really wanted a place to sit and rest my legs after hours of walking! Price-wise, you don’t really get the value at malls in Hong Kong, it’s pricier but generally you get a more comfortable environment.

It seems like this place has amazing stuffed potatoes, if you’ve tried it, let me know how it is in the comments below!

Well, I ate here when I was working in Hong Kong. I like this place but last time I went back the prices have increase so i look elsewhere. Vancouver food prices also increase as well. But I like the street food instead. Also, I like 大排档。I don't have a good translation in English like food stall or something like that but it doesn't sound right though. I just say it in Chinese.

It's great what your doing.

Your food blogs in Hong Kong is very useful since I will be visiting Hong Kong at the end of this month. Look forward to seeing more of your blogs. Thanks!

Today, we are going to visit a food place that is located…